VMX Day 1: Disruption in the Veterinary Industry, and the Wisdom of Michael J. Fox 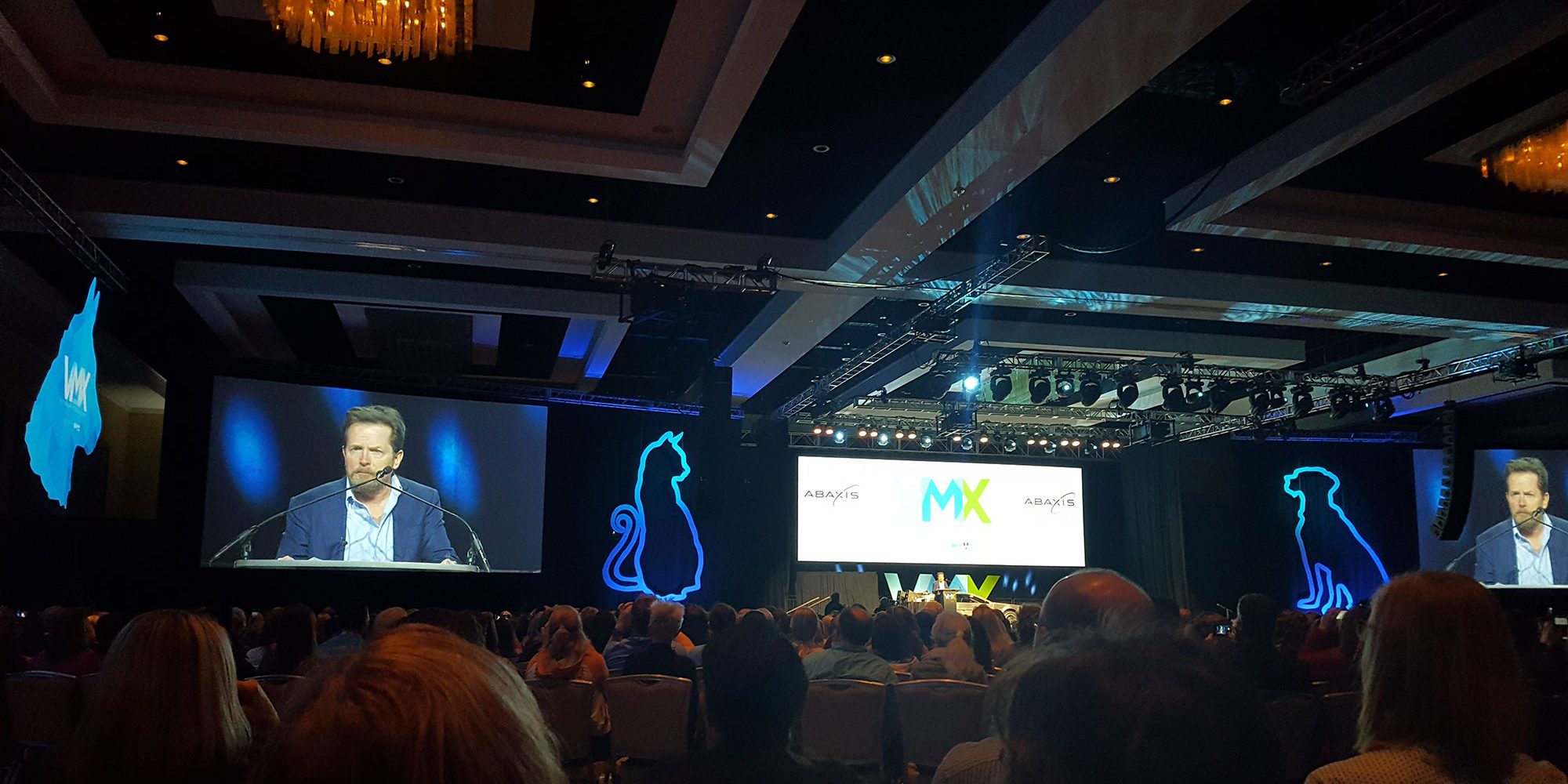 Having formerly practiced in Florida, I’ve been to NAVC several times. However, this is the first time I’ve attended when it’s been held at the Orange County Convention Center rather than the Gaylord Palms – and also under the new name VMX.

I like the new location – I appreciate having so many hotels and restaurants within walking distance. And registration went by fairly quickly considering there are over 17,000 attendees here.

The first day held plenty of interesting CE sessions. Although I think a highlight for many of us was the talk from the great Michael J. Fox.

This general session, which opened the conference, began with an extremely talented acapella group – their performance included a veterinary-themed finale of ‘You Ain’t Nothin’ But a Hound Dog’…

Next we were entertained by a Back to the Future-themed video, staring the NAVC’s CEO Thomas Bohn, alongside an actor playing Christopher Lloyd’s classic character Doc Brown (that actor got the voice just right!)

After the short trip to 1984, Mr. Bohn returned to the ‘future’ to introduce keynote speaker Michael J. Fox.

Mr. Fox’s talk, “A Funny Thing Happened on the Way to the Future,” was the perfect combination of funny, entertaining, and inspiring. And actually, some of his funniest comments were spontaneous – responses to audience reactions, or to losing his place in his notes.

Most inspiring to me, was his perspective on accepting whatever life has in store for you – and he walks the walk, having come to terms with a debilitating disease, which was diagnosed when he was only 29 years of age.

But Mr. Fox was also incredibly humble about his own journey, keeping a sense of humor about himself rather than highlighting all of the difficulties that I’m sure he must have experienced. And he’s obviously passionate about scientific research and carries a genuine desire to help others with neurological diseases. During the session, we also learned that NAVC will be donating $5,000 to the Michael J. Fox Foundation for Parkinson’s Research.

Plus, he’s a dog enthusiast – we got to hear all about his family’s dogs, and a stray that he rescued while shooting a movie in Thailand (that stray got a good home at a luxury Thai beach resort!)

For me, this session was the highlight of the day – but there’s a lot more to come!

This year, there’s a definite theme regarding the evolving nature of practicing veterinary medicine – with an emphasis on big changes and ‘disruption’.

In fact, during the opening talk, Thomas Bohn mentioned the need for disruption, in order to prevent veterinary practices from facing the same fate that many taxi drivers now face… to avoid the “Uberization” of the industry…

And here’s something I’ve definitely never seen before – a member of the audience (an audience of 5,000 people) interrupted Mr. Bohn’s opening speech in order to ask a question!

Or maybe it was a complaint rather than a question – it was difficult to hear the person who interrupted, but it sounded like they were upset about something… Mr. Bohn responded by noting that this type of disruption fits right in with what he was just suggesting… and noting that NAVC is a community where everyone has a voice.

So far as disruptions and innovations in the industry, hot topics seem to include: telemedicine, personalized care (this includes genetic testing for very detailed personalization), and how to best meet the growing demands of millennial pet owners – statistically a very dedicated pet-owning generation…

I’ll report more on these trends as they’re covered in the upcoming days at the conference.

Easy SEO for veterinary practices: Use FAQ pages to your advantage
October 29, 2019

SEO for Veterinary Practices: Sniff out more great keywords for your website
August 31, 2019